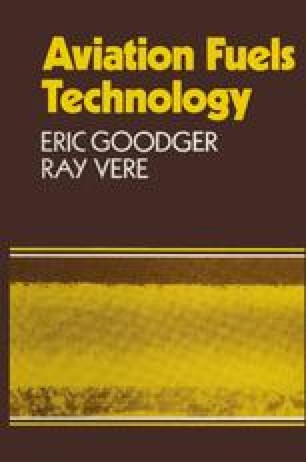 This study has reviewed the current situation with regard to aviation fuel quality arising as the dynamic resultant between the constraints of supply and the requirements of demand. It also comments briefly on both the immediate historical background to this situation, and the alternatives that offer future potential. Aviation fuel quality and availability are seen to be influenced by such technological factors as production techniques, component control, measurement precision and the various aspects of service performance. Additional factors include the supply and demand of non-aviation fuels, particularly motor gasoline and diesel fuels, and thus the relative cost values of each of these products. In turn these costs, which have become of crucial importance in airline finances, are dominated by taxes, regulations and matters of a political, and possibly military, nature. An accurate prediction of the fuel quality likely to be available from the year 2000 is needed now to give the direction for future engine, fuel system and airframe design, research and development programmes. A new design concept started now will not be ready for commercial production until after the turn of the century. This prediction could also determine the potential life of existing equipment since it will highlight those modifications that will need to be carried out to operate on these fuels.