Advanced Graphics with the BBC Model B Microcomputer 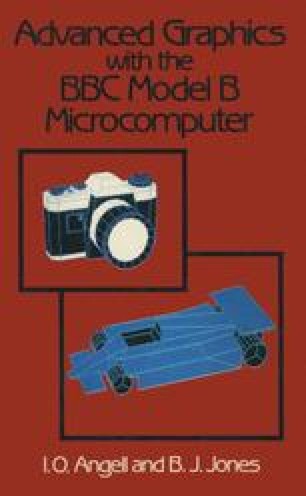 Before we lead on to a study of the graphical display of objects in three-dimensional space, we first have to come to terms with the three-dimensional Cartesian coordinate geometry. As in two-dimensional space, we arbitrarily fix a point in the space, named the coordinate origin (or origin for short). We then imagine three mutually perpendicular lines through this point, each line going off to infinity in both directions. These are the x-axis, the y-axis and the z-axis. Each axis is thought to have a positive and a negative half, both starting at the origin; that is, distances measured from the origin along the axis are positive on one side and negative on the other. We may think of the x-axis and y-axis in the same way as we did for two-dimensional space, both lying on the page of this book say, the positive x-axis ‘horizontal’ and to the right of the origin, and the positive y-axis ‘vertical’ and above the origin. This just leaves the position of the z-axis: it has to be perpendicular to the page (since it is perpendicular to both the x-axis and the y-axis). The positive z-axis can be into the page (the so-called left-handed triad of axes) or out of the page (the right-handed triad). In this book we always use the left-handed triad notation. What we say in the remainder of the book, using left-handed axes, has its equivalent in the right-handed system — it does not matter which notation you finally decide to use as long as you are consistent.