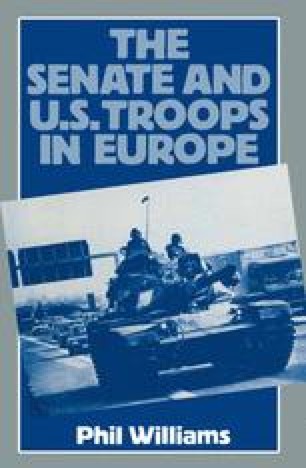 The Pressure Peaks: The 1973 Debate

The controversy over US troops in Europe was more intense during 1973 than in any previous year. The main reason for this was the presence in the Senate of a profound and pervasive sense of dissatisfaction or, more accurately, a combination of impatience, disappointment, resentment and frustration — with the European allies, with the continuing high levels of defence expenditure in the United States, with the centralisation of power in the Presidency and, perhaps most important, with the attitudes, actions and policies of President Nixon. Nationalism, ideology, institutional pride and partisan considerations became inextricably bound up in ways which provoked a far more serious challenge to the American military presence in Western Europe than anything which had occurred hitherto.

Foreign Policy Pressure Peak Executive Branch Military Presence Defence Budget
These keywords were added by machine and not by the authors. This process is experimental and the keywords may be updated as the learning algorithm improves.
This is a preview of subscription content, log in to check access.