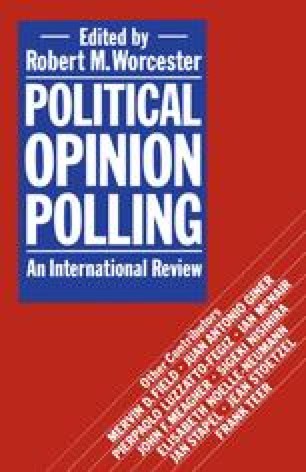 For the first time in Spain, Madrid will publish tomorrow a prediction of the outcome of the municipal elections in the capital. Two hundred people are working [on this project] for our readers. (Madrid, 18 November 1966, p. 3)

On 16 November 1966 the daily Madrid, an evening paper which then headed the journalistic opposition to the authoritarian regime of General Franco,1 published an editorial which posed the question of the possibility of carrying out pre-election surveys in Spain: ‘Will it be possible to conduct these polls among us, to serve the public and the politicians and to ascertain their opinions?’2

Public Opinion Political Culture Opinion Survey Poll Result Spanish Economy
These keywords were added by machine and not by the authors. This process is experimental and the keywords may be updated as the learning algorithm improves.
This is a preview of subscription content, log in to check access.