The Economics of Building Societies 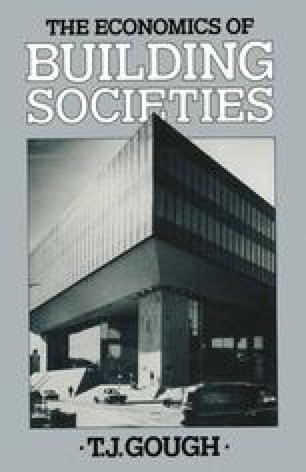 The Economics of Building Societies pp 1-14 | Cite as

The above quotation might at first sight seem to allude to the growth of the building societies in recent decades. The ‘war’ referred to one might guess, with justification, to be the Second World War. The quotation in fact comes from a statement made in 1927 by Sir Josiah Stamp1 and the war he refers to is the Great War.

Head Office Building Society Managerial Utility Mortgage Interest Branch Office
These keywords were added by machine and not by the authors. This process is experimental and the keywords may be updated as the learning algorithm improves.

The rate of growth of the Building Society Movement … has been so different from all previous experience in degree as to make the movement almost different in kind. From being a mere ancillary feature in the national economic life, it is now in the main stream of its development. For, prior to the war it was at least possible to conceive the economic development of the community proceeding, in the absence of such an institution, along alternative lines. It was at least possible, for example, to conceive that the system of private mortgage could have been extended or amplified to meet the actual and gradually growing needs of the owner-occupiership of dwelling-houses. But today the situation is essentially changed, for the elimination of this economic agency would have made a profound difference, and not a mere casual change, to our economic life. It is in this sense, therefore, that the movement, while exhibiting no particular changes in form, has enjoyed a re-birth.