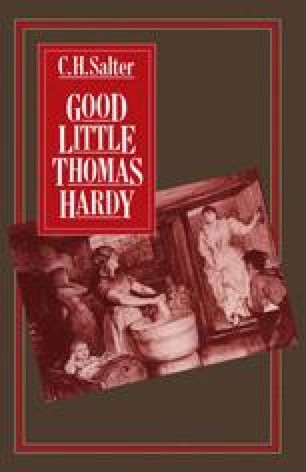 If Hardy is not modern or important by virtue of his social criticism, is he so by virtue of some more general ideas? It seems natural to approach this question by re-considering how and how much Hardy was influenced by other writers, and to divide those influences into ideological, factual and stylistic.1 I have already suggested2 that Hardy’s impressionism, tentativeness, and insistence on his own ignorance make it unlikely that he should be much influenced ideologically, but I shall consider this question here, and factual and stylistic influence in the following chapter. There has of course been much work done on ideological influences on Hardy, but some repetition is necessary here. In this chapter I shall not repeat the word “ideological” but simply speak of “influences”, and I shall only consider Schopenhauer, Von Hartmann, Comte, Darwin, Essays and Reviews, Mill, Arnold, and Leslie Stephen. Hardy himself claimed to be more in harmony with Darwin, Huxley, Herbert Spencer, Hume and Mill than with Schopenhauer and Von Hartmann.3 He also said that he had been “much influenced” by Leslie Stephen’s “philosophyi”4 and “much impressed” as a young man by Essays and Reviews.5

Eighteenth Century Late Lyric Literary Note Moral Element Christian Ideal
These keywords were added by machine and not by the authors. This process is experimental and the keywords may be updated as the learning algorithm improves.
This is a preview of subscription content, log in to check access.