Keynes and the Bloomsbury Group 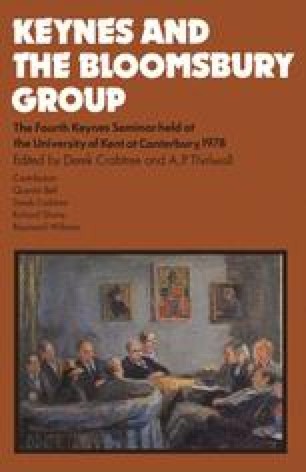 Keynes and the Bloomsbury Group pp 40-67 | Cite as

The Significance of ‘Bloomsbury’ as a Social and Cultural Group

There are serious problems of method in the analysis of cultural groups. When we are analysing large social groups we have some obvious and useful methods at our disposal. The large numbers allow significant statistical analysis. There are usually organised institutions and relatively codified beliefs. There are still many problems in analysis, but we can at least begin with these reasonably hard facts. In the case of a cultural group, the number of people involved is usually much too small for statistical analysis. There may or may not be organised institutions, through which the group works or develops, but even the most organised institutions are different in scale and kind from those of large groups. The principles which unite the group may or may not be codified. Where they are codified, one kind of analysis is immediately relevant. But there are many important cultural groups which have in common a body of practice or a distinguishable ethos, rather than the principles or stated aims of a manifesto. What the group itself has not formulated may indeed be reduced to a set of formulations, but some effects of reduction — simplification, even impoverishment — are then highly probable.

Cultural Group Organise Institution Significant Statistical Analysis Keynesian Economic Social Conscience
These keywords were added by machine and not by the authors. This process is experimental and the keywords may be updated as the learning algorithm improves.
This is a preview of subscription content, log in to check access.