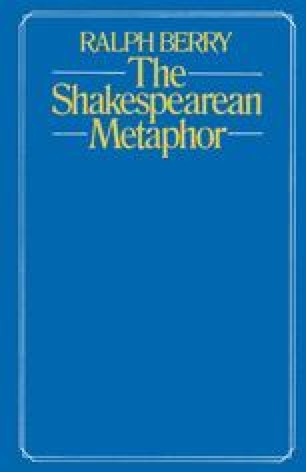 The Shakespearean Metaphor pp 48-60 | Cite as

Henry V: The Reason Why

It is not, I take it, necessary today to argue for the double impact of Henry V. We can see Henry V as a great war play embedded in a greater anti-war play. In the theatre, the director can choose which of these two plays he intends to project, or acknowledge. So the gap between the Olivier film of 1944 and the Royal Shakespeare Company’s production of the mid-sixties is enormous. But the critic can acknowledge one play only, and he is therefore committed to the larger, and necessarily ironic account of the actions recorded in Henry V. Unlike the director, he cannot, for instance, cut the conclusion of the Agincourt soliloquy: ‘… but in gross brain little wots / What watch the king keeps to maintain the peace…’ (iv, 1, 299–300) because it might spoil the effect, if the audience actually thought about what Henry was saying. Nor can he minimise the prelates’ discussion in the opening scene.1 Broadly, the ironic reading of Henry V, which has received some outstandingly able advocacy,2 seems to me unaswerable. But I shall assume at least a general acquiescence on that score, and concentrate on the mechanism of the play. It seems evident that Shakespeare’s strategy is to keep his Crispin Crispian audience happy, while leaving on record the reservations that the ‘other’ audience can pick up. This calls for sleight-of-hand of the highest order, for the disparity between the two versions has to be indicated discreetly yet unmistakably. The relations between Chorus and play symbolise this disparity, and we can begin with them.

Political Theatre Double Impact General Acquiescence Total Play Henry Versus
These keywords were added by machine and not by the authors. This process is experimental and the keywords may be updated as the learning algorithm improves.
This is a preview of subscription content, log in to check access.

Henry V: The Reason Why

Cite this chapter as:
Berry R. (1978) Henry V: The Reason Why. In: The Shakespearean Metaphor. Palgrave Macmillan, London