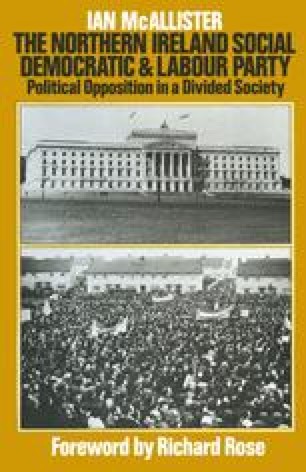 In most Western democracies, oppositions which seek to alter the fundamental framework of the political system have flourished only in the initial stages of nation-building. The disaffected minority represented by this type of opposition gradually comes to use and identify with the institutions of the political system and there is a corresponding decline in the proffering of ‘sweeping alternatives to the basic framework of the political system, for … it would endanger rules and institutions now familiar to oppositions, without promising successful change.’1 Where a society is fundamentally divided and, in effect, in a perpetual condition of nation-building with the form and existence of the state continually in question, the options that a permanent minority can exercise are limited.

Communal Violence Committee System Unionist Government Street Violence Alternative Assembly
These keywords were added by machine and not by the authors. This process is experimental and the keywords may be updated as the learning algorithm improves.
This is a preview of subscription content, log in to check access.