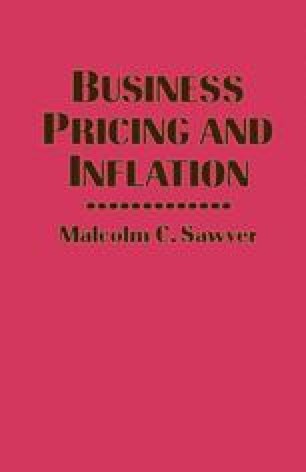 In recent years inflation has often been presented as a major, if not the major economic problem facing many industrialised capitalist countries. During the 1970s, the rate of price inflation averaged an annual rate of over 13 per cent in the UK, nearly 8 per cent in the USA and 9 per cent in the OECD area as a whole. These rates of inflation were considerably above those experienced in the 1950s and 1960s, when the typical rates of inflation were more like 2 to 4 per cent per annum. Governments often appeared to be evicted from office through a failure to control or reduce inflation, whilst others were elected on the promise of controlling inflation. Increasingly, Western governments have pursued restrictive fiscal and monetary policies, with the declared aim of the reduction of the rate of inflation. Judged by the results in terms of inflation, these policies have been singularly unsuccessful, with at the time of writing, the lowest rate of inflation in the UK since 1973 being 9 per cent (in 1978) and 5.8 per cent in the USA. Alongside these deflationary policies, unemployment has been high and rising. In the United Kingdom it has been above 5 per cent of the labour force since 1975, and had reached 14 per cent by mid-1982. In the United States with unemployment statistics derived in a different manner, unemployment has remained generally above 6 per cent. Across the OECD area, unemployment averaged under 3½ per cent in the first five years of the 1970s, rose to nearly 5¼ per cent in the second five years and then to nearly 6 per cent in 1980 and over 7 per cent in 1981.

Monetary Policy Price Change Real Wage Money Supply Input Price
These keywords were added by machine and not by the authors. This process is experimental and the keywords may be updated as the learning algorithm improves.
This is a preview of subscription content, log in to check access.