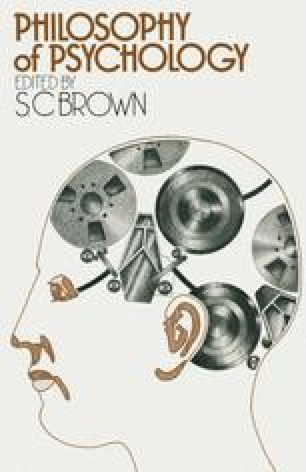 The Appearance of Free Will

Before we discuss as complicated a topic as determinism and free will before a mixed audience of philosophers and psychologists, it may be useful to clear away some basic misconceptions about what psychologists claim to be doing, hope to be doing, or are, in fact, doing. In the first instance, we believe that psychologists are engaged in the enterprise of accumulating positive knowledge about a set of events and that the boundaries of that set are relatively fuzzy and undefined. Just as Dr Sloman suggests that the word ‘physics’ be used ‘to cover what is called physics in present-day physics departments in respectable universities’, so we would be willing to use the word ‘psychology’ to cover what is called psychology in present-day psychology departments in respectable universities. We further assume with Dr Sloman that physics and psychology alike are made up of a set of empirical findings, a body of theory (though in the case of psychology obviously more disputable than in the case of physics), and a host of experimental and mathematical techniques (including scales of measurement).

Physical Theory Choice Behaviour Common Language Psychological Theory Ordinary Language
These keywords were added by machine and not by the authors. This process is experimental and the keywords may be updated as the learning algorithm improves.
This is a preview of subscription content, log in to check access.

Cite this chapter as:
Mandler G., Kessen W. (1974) The Appearance of Free Will. In: Brown S.C. (eds) Philosophy of Psychology. Palgrave Macmillan, London