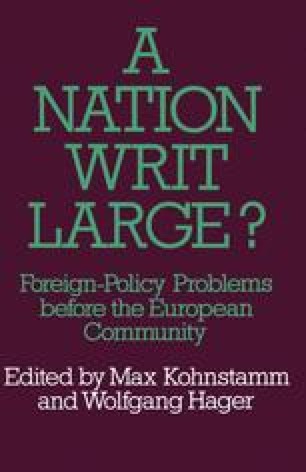 In 1972, the Six and the new members of the EEC imported about 60 per cent of their total energy requirements. In money terms, this probably accounted for some 15–20 per cent of their total imports. Demand for energy in the Community is now forecast to grow as fast as, or slightly faster than, the economy in general. Energy imports will at first grow faster; but if the present good fortune in the North Sea continues their rate of increase should slacken after 1975. Even so, by 1980 we shall be lucky if we are not still importing well over half the Community’s energy requirements; and by 1985, the proportion may still be 45 per cent. In sheer volume, that may mean importing nearly as much as our whole energy consumption today. It is not easy to guess how much energy will then represent in our total import bill. True, the volume of energy imports might not rise as fast as that of the Community’s total imports. But the price of imported energy, which throughout the sixties fell while all other prices rose, is now generally expected at least to keep pace with general inflation; and there is little in the market situation to prevent it rising much faster.

Middle East Government Revenue Eastern Hemisphere Host Government Fiscal Revenue
These keywords were added by machine and not by the authors. This process is experimental and the keywords may be updated as the learning algorithm improves.
This is a preview of subscription content, log in to check access.