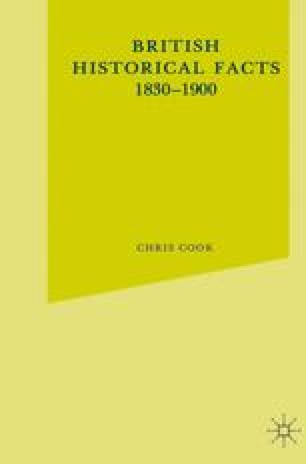 Statistics of religious practice have customarily received a bad press, often being dismissed by historians and sociologists as too unreliable to be useful. While in some cases this attitude appears to be based simply upon a prejudice against the ecclesiastical character of the data, in others it rests upon more substantive grounds. Until the beginning of the present century, in certain denominations, the returns from which published statistics were abstracted were often incomplete, and there has always been scope for error or exaggeration at several stages in the collection and collation of the material. These deficiencies clearly invalidate any uncritical use of the religious statistics presented in the following tables, but they are deficiencies which are equally characteristic of much of the secular statistical evidence about nineteenth-century society. Taken as a whole, religious statistics of the nineteenth century are neither distinctly more nor distinctly less reliable than other types of statistical data about the period. They do, however, vary considerably from denomination to denomination in accuracy and completeness. Methodist membership figures constitute some of the earliest and most reliable statistical series available to students of British society: tightly-knit connectional organisation was a guarantee of virtual completeness, and Methodist polity, by providing for the quarterly review of commitment among members, also ensured a minimum of distortion due to merely nominal attachment.

Religious Practice Church Membership Religious Statistic Baptist Church Parliamentary Paper
These keywords were added by machine and not by the authors. This process is experimental and the keywords may be updated as the learning algorithm improves.
This is a preview of subscription content, log in to check access.