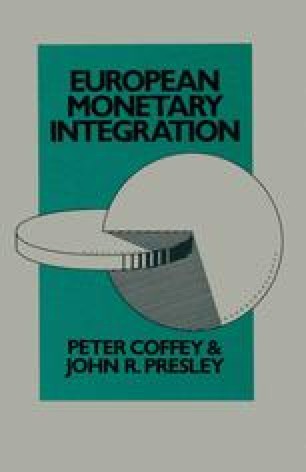 Proposals for a Monetary Union

The authors have on numerous occasions during the past year1 put forward their famous ‘nine points’ for a monetary union. In the light of the conciliatory agreements reached by the Council of Ministers in Brussels in February 1971, these proposals have been slightly modified. The basic philosophy, however — economic co-ordination moving towards the introduction of a European currency — has not changed. The nine points are set out in detail in the pages that follow.

Central Bank Monetary Union Common Currency European Economic Community Fixed Exchange Rate
These keywords were added by machine and not by the authors. This process is experimental and the keywords may be updated as the learning algorithm improves.
This is a preview of subscription content, log in to check access.