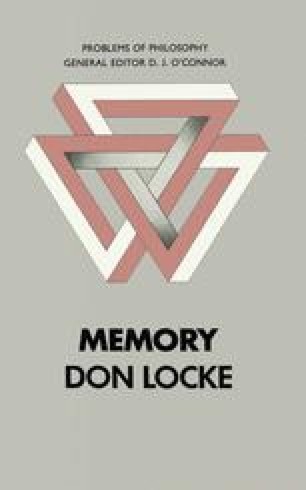 Chapter
Part of the Problems of Philosophy book series (PRPH)

The Realist theory of memory hopes to avoid the difficulties inherent in the Representative theory by maintaining that what we are aware of, when we remember, are not representations of past items, but those past items themselves—just as, according to the Realist theory of perception, what we are aware of, when we perceive, are not ideas or representations of objects in the world around us, but those objects themselves. As J. Laird puts it, “Memory does not mean the existence of present representations of past things. It is the mind’s awareness of past things themselves” (Study in Realism, p. 56). This Realist theory has been by no means so widespread as the Representative account, but it was common in the first quarter of this century, presumably through the influence of Henri Bergson, for whose metaphysics the notion of “pure memory,” a direct awareness of the past, was of central importance.