The Lords of Romagna 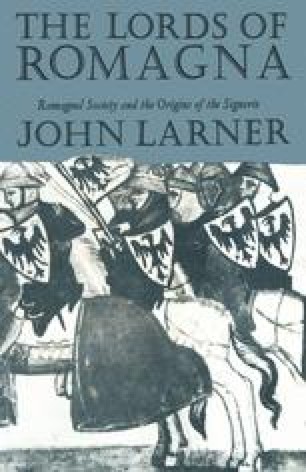 Fo. too long the slow transition from commune to signori. has been popularly portrayed as a process in which a free and democratic society, represented, as in Carducci’s poetry, by virtuous men of heroic stature, was replaced by an evil form of government whose representative was the signor., symbol of wickedness, albeit of cultivated wickedness. Such a change could only satisfactorily be explained in moral terms, and historians of the nineteenth century, in considering the phenomenon, drew heavily upon concepts of moral decline. A proud and independent spirit was said to have given way to an enervating acquiescence in tyranny, in which the citizens lost the habit of managing their own affairs.

Fifteenth Century Fourteenth Century Moral Term Moral Decline Literary Moralism
These keywords were added by machine and not by the authors. This process is experimental and the keywords may be updated as the learning algorithm improves.
This is a preview of subscription content, log in to check access.