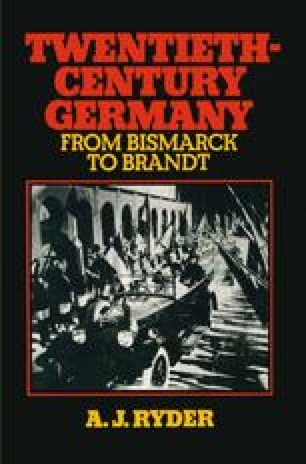 Twentieth-Century Germany: From Bismarck to Brandt pp 283-316 | Cite as

‘The irony of history’, wrote Engels in a famous passage, ‘turns everything upside down.’ The First World War, according to Allied claims at the time, was fought to make the world safe for democracy. Yet it was followed during the twenty years of uneasy peace, by the rise, in one European country after another, of popular dictatorships. Most of these can be loosely but conveniently described as Fascist. As had happened in 1848, popular government produced an alliance, followed by a clash between liberalism and nationalism from which nationalism emerged victorious. Mussolini, the first of the new style dictators and in many ways their exemplar, spoke with contempt of the ‘putrefying corpse’ of freedom, and as early as April 1922 (six months before he came to power) announced that his party, the Fascisti, would make an end of the liberal state.1As a system of ideas Fascism is hard to define because it lacked clarity and coherence especially in Germany where it bore many traces of political romanticism. But as a political movement, embodied in parties or groups struggling for or holding power, it had certain easily recognisable characteristics: nationalism, xenophobia, glorification of the state; a preference for the peasant and small businessman against both big business and the consumer; adulation of an authoritarian and preferably charismatic leader; exultation of instinct over reason; a cult of dynamism and militarism; regressive social attitudes (for example towards the emancipation of women); anti-semitism.

Trade Union Civil Servant Charismatic Leader Weimar Republic German People
These keywords were added by machine and not by the authors. This process is experimental and the keywords may be updated as the learning algorithm improves.
This is a preview of subscription content, log in to check access.