Rarity and the Poetic: The Gesture of Small Flowers 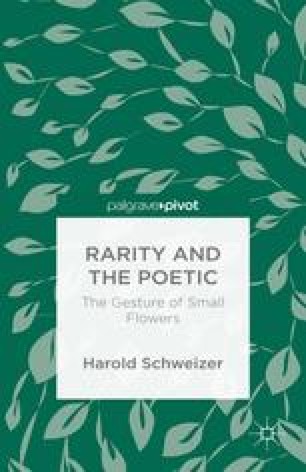 Rarity and the Poetic: The Gesture of Small Flowers pp 54-61 | Cite as

The Rarity of One’s Own Death

The rarity of death, its stunting fragmentations and spectral transformations announce themselves in an experimental sonnet by C.K. Williams. The poem proceeds from images of physical violence to a gesture of a tenuous resistance against trauma and oblivion. It ends not in the void of hopelessness but in a wisp of affirmation of human value. The poem functions as a thin, verbal sieve that, in the space of fourteen meager lines, briefly delays the passage from the material to the immaterial. The image of the vanishing of human life is itself a rarity: it can be glimpsed in Williams’s sonnet in the diaphanous space, hard to scan or notice, between the fragmented and the full pentameter line.

Physical Violence Spectral Transformation Passive Voice Passive Construction Dark Seed
These keywords were added by machine and not by the authors. This process is experimental and the keywords may be updated as the learning algorithm improves.
This is a preview of subscription content, log in to check access.