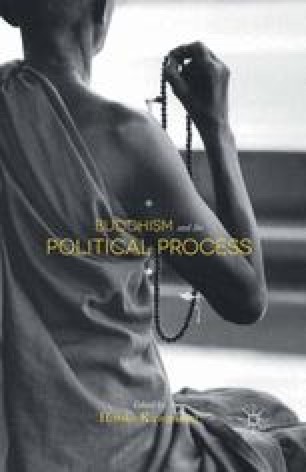 Buddhism and the Political Process pp 1-10 | Cite as

Introduction to Buddhism and the Political Process: Patterns of Interaction

Richard Niebuhr in his groundbreaking analysis, Christ and Culture (1951), of the possible relations between Christianity and wider society identifies a series of discrete points in a continuum generated through the interaction of Christian ideals and the putative imperfections of worldly existence. At one extreme, Niebuhr calls it Christ against culture, religion appears in the negative and antagonistic terms, most adequately represented by John the Baptist’s voice crying in the wilderness. At the opposite end of the spectrum in Christ of culture, we find forms of interaction in which religion has so fully imbibed the spirit of the times that it becomes almost impossible to disentangle it from its wider societal context. Between these extremes, three intermediate positions are identified, each of which expresses the author’s principal theological preoccupations.

Khmer Rouge Buddhist Monk Monastic Order Christian Ideal Buddhist Monastery
These keywords were added by machine and not by the authors. This process is experimental and the keywords may be updated as the learning algorithm improves.
This is a preview of subscription content, log in to check access.