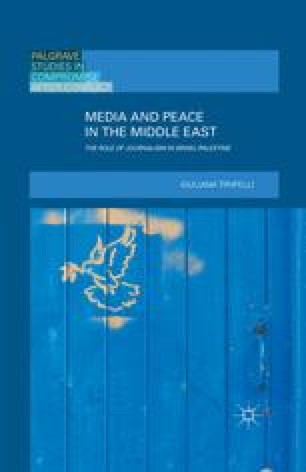 Journalists and Their Profession

This chapter discusses the professional models that journalists refer to when discussing their own work in the context of Israeli—Palestinian relations, how they articulate the meaning of professional standards, and how they evaluate their role in relation to the idea of transforming the conflict. The ideological factors preventing engagement with the idea of journalism as a social product and influencer are considered, and the role of journalism in social change and peace promotion discussed. The chapter is divided into three parts. The first section explores the views of the interviewees on the role of journalism, the requirements and guarantees of professional coverage of Israeli—Palestinian relations, and the tensions between ideals and practices. The second section reviews the factors that push journalists towards “war journalism” practices rather than towards peace and peace journalism. The final section discusses how these journalists define their profession and analyse the role that media could play in transforming this conflict, focusing particularly on internalised ideological constraints that prevent the adoption of alternative practices. Only a small group of interviewees supported the idea that the media should aim to transform society. A second group of journalists believed that this could only occur under specific political conditions. A third group rejected the idea of a transformative role for their profession.

Middle East Peace Process Political Field Palestinian Authority Israeli Government
These keywords were added by machine and not by the authors. This process is experimental and the keywords may be updated as the learning algorithm improves.
This is a preview of subscription content, log in to check access.