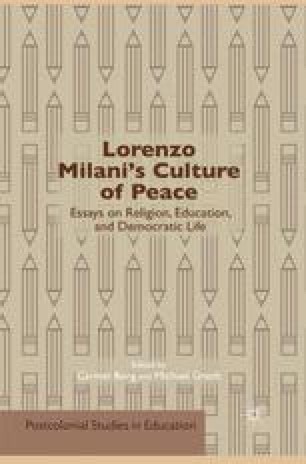 As we approach the fiftieth year since Don Lorenzo Milani (1923–1967) wrote a rejoinder in response to a letter sent to the newspaper— La Nazione — by a group of retired military chaplains, in which they referred to conscientious objection as “an insult to the fatherland and to the Fallen” (Burtchaell, 1988, p.17), this book offers a stark reminder that Milani is not simply a man of his times but a prophet that speaks of the absence of today’s peace in a global context marked by savage inequalities and asymmetries of power. As illustrated by a number of contributions to this book, the war on the poor has intensified. Simultaneously, the various manufacturers of consent continue in their quest to persuade us that the real war is on terror. Milani’s legendary letters, alongside his radical reading of the gospels, translated into his conscious and deliberate, preferential option for the poor, and his educational vision, reflected in educational projects that welded critical literacy with transformative action, focus on the link between peace and social justice. They denounce blind obedience to hegemonic discourses that alienate the poor from the real threats to lasting peace, luring them into a war culture that ultimately leads them to shed their blood in wars against their fellow poor. His call for resistance and subversion by the oppressed is echoed in this book which, through most of its chapters, clearly distinguishes between authentic peace and pacification, that is, between just peace and a pseudo-peace arrangement that violently reproduces the social and economic status quo on a global scale.

Social Justice Critical Literacy Radical Reading Conscientious Objection Educational Project
These keywords were added by machine and not by the authors. This process is experimental and the keywords may be updated as the learning algorithm improves.
This is a preview of subscription content, log in to check access.