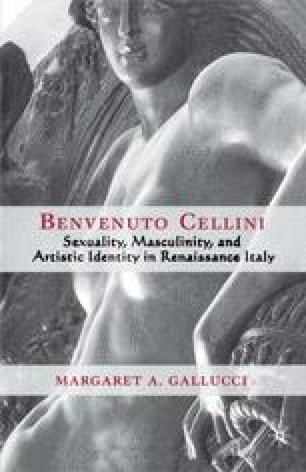 On 15 February 1571 Benvenuto Cellini was buried in the church of the Santissima Annunziata in Florence. Amid glittering pomp and ceremony, members of the prestigious Academy of Design stood solemnly with members of the congregation as Cellini’s body was carried from his house to the church. The procession wound its way slowly through the narrow cobblestone streets, followed by nearly all of Florence, nobleman and commoner alike, until it arrived at the steps of the church, where throngs packed the church hoping to catch a final glimpse of the great artist. There, in the numinous glow of a galaxy of candles, four members of the Academy raised the coffin and transported it to the altar. When Cellini’s body was set down and all honored guests seated, a Servite friar rose, ascended to the pulpit, and gave a powerful, moving oration praising Cellini, the fine disposition of his body and soul, and his incomparably virtuous work and life.1