The Theology of Work 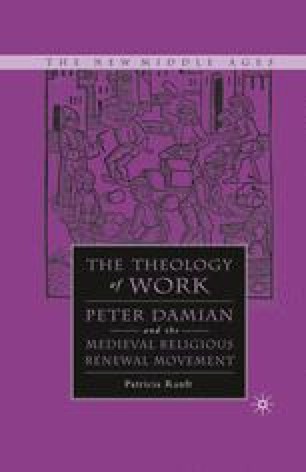 So far I have argued that the two central tenets in Damian’s social theology were eschatology and witness. His theology of work flowed naturally from the basic principles contained in each and developed as a response to the inherent obligations of those principles. Both eschatology and witness demand that humans continually shape the world into its ideal form as intended at creation. Eschatology mandates that one builds a future that resembles the eschaton, and witness serves as a guide for all to accomplish this. Both require physical or mental effort: work. Justification for work is rooted in humanity’s creation as imago Dei. When God made humans imago Dei, he, as creator, made them co-creators. They participate in creation by completing the work of creation for the eschaton and eliminating all present imperfections—“re-forming” the world—bearing perfect witness to God’s original intent. This means that all human activity, be it intellectual, spiritual, or physical, that readies the world for end time is worthy of being called work. Consequently, Damian has an abiding respect for all work and all workers. Furthermore, Damian holds that work is not the sole domain of one class, but an obligation of every human. The specific task of each individual varies, but not its intrinsic value, for it is only when the work of each person is united with the work of every other person that creation is complete.

Religious Order Thirteenth Century Twelfth Century Eleventh Century Common Life
These keywords were added by machine and not by the authors. This process is experimental and the keywords may be updated as the learning algorithm improves.
This is a preview of subscription content, log in to check access.