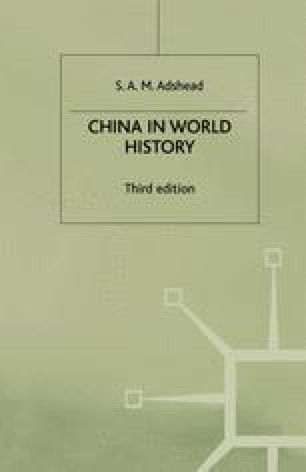 This book began at a high level of generality. It assumed the existence since Neolithic times of four primary civilizations: Western Eurasia, East Asia, Black Africa and pre-Columbian America. It assumed too that, whatever the previous originality of Southeast Asia and the subsequent leadership of Japan and the Lesser Tigers, China had usually been the dominant nucleus of East Asia. It sought to explore both the relations between China and the other primary civilizations and the Chinese contribution to a global order, emerging since the thirteenth century, defined in terms of world institutions. It concluded that, from these perspectives, China’s history was part of everyone’s history and should be of interest to more than Sinologists. In particular, the development of Europe to centrality within a world order required reference to China. Without an assessment of China’s contribution, that world order itself was not fully intelligible. Finally, it was hoped that these perspectives would, for both Chinese and non-Chinese, enlarge the imaginative horizons within which historical enquiry is conducted.