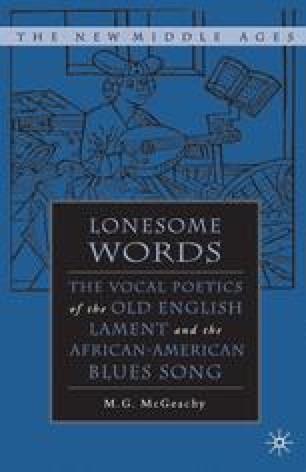 So began the battle of the Oral Formula in the field of Old English poetry. Milman Parry and Albert B. Lord’s oral-formulaic theory, which applied the Yugoslav compositional technique to the texts of classical epics, served as a basis for Francis P. Magoun’s study of Old English narrative poetry. In his 1953 article, “Oral-Formulaic Character of Anglo-Saxon Narrative Poetry,” Magoun presented the formulaic half-lines of the opening of Beowulf as evidence of the poem’s oral composition. The article initiated a new scientific approach to the search for the Anglo-Saxon oral bard and was followed by a vast number of studies, which viewed the text of Old English narrative poems, such as Beowulf, as a record of an extempore performance of a poet trained in the use of traditional formulas to rapidly create an epic.1

Oral poetry, it may be safely said, is composed entirely of fortnulas, large and small, while lettered poetry is never formulaic,…