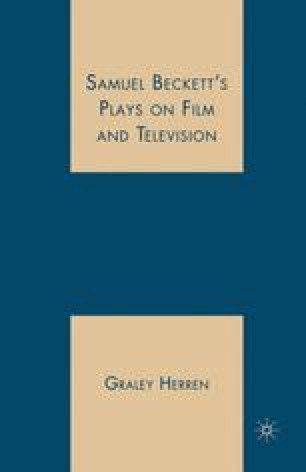 Quadrat I + II: Eff It with Color

Before one writes a sentence about Beckett’s fourth teleplay, one already encounters difficulties. The first problem arises from the very decision to speak for a tele-mime that conspicuously declines to speak for itself. Having cleared that hurdle, one then faces a rather embarrassing and irksome nominative obstacle: what is the teleplay’s name? Commentators cannot even agree on that much. Beckett’s preproduction notes used the provisional title “Quad,” but the actual production deviated significantly from original plans, eventually including a sequel collectively broadcast by SDR on October 8, 1981 as Quadrat I + II.1 Despite Beckett’s explicit adoption of this new title, most critics persist in using the abandoned title Quad.2 Critical confusion seems appropriate, however, given the playwright’s own conflicted frustration with the piece. His first known reference to the teleplay came on January 1, 1980 in letter to Alan Schneider, where he mentioned a “crazy TV piece for Stuttgart” (Harmon 383). When he finally visited the Stuttgart studios in April 1981 for preproduction discussions of “Quad,” he was extremely discouraged by the results. He reported back to Schneider, “The few days in Stuttgart were not very satisfactory. I’m quite lost in TV technicalities & shall never write again for that medium” (Harmon 403). Of course, his previous work had displayed innovative use of “TV technicalities,” and he would in fact return to the television medium for two more projects.

Danger Zone Fact Return Silent Film Blank Page Stage Direction
These keywords were added by machine and not by the authors. This process is experimental and the keywords may be updated as the learning algorithm improves.
This is a preview of subscription content, log in to check access.

Cite this chapter as:
Herren G. (2007) Quadrat I + II: Eff It with Color. In: Samuel Beckett’s Plays on Film and Television. Palgrave Macmillan, New York