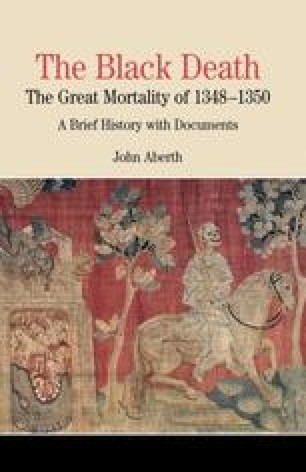 Although doctors enjoyed a considerable amount of prestige in medieval urban communities by the fourteenth century, they generally did not fare well at the hands of medieval chroniclers of the Black Death, who accused them of cowardice, impotence, and, above all, greed. Such complaints were not specifically related to the Black Death; rather, doctors were often the butt of satire and objects of scorn in the popular literature of the later Middle Ages. But the Black Death sharp-ened these complaints. One of the harshest critics was the Florentine chronicler Matteo Villani, who complained that “for this pestilential infirmity [of 1348], doctors from every part of the world had no good remedy or effective cure, neither through natural philosophy, medi-cine [physic], or the art of astrology. To gain money some went visiting and dispensing their remedies, but these only demonstrated through their patients’ death that their art was nonsense and false.”1 In Avignon, however, Louis Sanctus charged doctors with refusing to visit the sick even for large sums (Document 7). Other commentators, such as Boccaccio (Document 6), John VI Kantakouzenos (Document 8), and Agnolo di Tura (Document 17), simply argued that physicians and medicine were powerless in the face of plague, although Boccaccio qualified this with the observation that many quacks had lately entered the profession and that the disease was perhaps incurable or too new to be treated properly. Even the best known doctor of the day, Gui de Chauliac, physician to the pope and a respected surgeon, indicted his own profession during the Black Death (Document 14).

Medical Response Muslim World Drinking Wine Natural Heat Continuous Fever
These keywords were added by machine and not by the authors. This process is experimental and the keywords may be updated as the learning algorithm improves.
This is a preview of subscription content, log in to check access.

Cite this chapter as:
Aberth J. (2005) Medical Responses. In: The Black Death. The Bedford Series in History and Culture. Palgrave Macmillan, New York