Black Itinerants of the Gospel 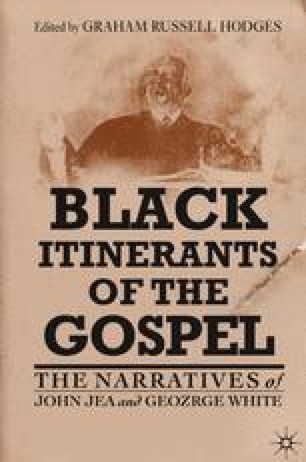 The Life, History, and Unparalleled Sufferings of John Jea, the African Preacher
Chapter

I, John Jea, the subject of this narrative, was born in the town of Old Callabar, in Africa, in the year 1773. My father’s name was Hambleton Robert Jea, my mother’s name Margaret Jea; they were of poor, but industrious parents. At two years and a half old, I and my father, mother, brothers, and sisters, were stolen, and conveyed to North America, and sold for slaves; we were then sent to New York, the man who purchased us was very cruel, and used us in a manner, almost too shocking to relate; my master and mistress’s names were Oliver and Angelika Triehuen, they had seven children—three sons and four daughters; he gave usa very little food or raiment, scarcely enough to satisfy us in any measure whatever; our food was what is called Indian corn pounded, or bruised and boiled with water, the same way burgo is made, and about a quart of sour butter-milk poured on it; for one person two quarts of this mixture, and about three ounces of dark bread, per day, the bread was darker than that usually allowed to convicts, and greased over with very indifferent hog’s lard; at other times when he was better pleased, he would allow us about half-a-pound of beef for a week, and about half-a-gallon of potatoes; but that was very seldom the case, and yet we esteemed ourselves better used than many of our neighbors.

Commanding Officer Holy Ghost Divine Grace Spiritual Drink Single Reef
These keywords were added by machine and not by the authors. This process is experimental and the keywords may be updated as the learning algorithm improves.
This is a preview of subscription content, log in to check access.