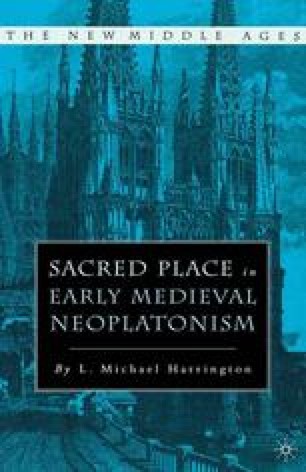 Our survey of sacred place in early medieval Neoplatonism has revealed two threads running through the philosophy of the period that are keenly relevant to the present-day rediscovery of place and sacred place. The first concerns Vincent Scully’s dematerialization thesis: that Neoplatonic principles underlie the use of architecture to replace the material world with an immaterial one. We have some evidence of such principles. The Neoplatonists do think of some bodies as more material and others as less material, and they do think of the less material bodies as having more in common by nature with the divine intellect. But the theory of the sacred place developed by the later Neoplatonists does not make the dematerialization of bodies or of the place itself the defining characteristic of the sacred place. As Iamblichus and Dionysius both say, the sacred place is necessary because most human beings are only capable of interacting with the material. A sacred place that was less material would be less able to accomplish its task of connecting such people with the divine. Instead of directly revealing immaterial characteristics in immaterial bodies, the sacred place reveals the immaterial symbolically, through the thoroughly material bodies appropriate for most human beings. Within the ritual and mythic context of the sacred place, the material body acquires a significance beyond its nature, and allows the worshipper to live the divine life in the visible realm, or leads the worshipper to the contemplation of the divine through the visible realm.

Material Body Interior Space Sacred Place Exterior Space Divine Life
These keywords were added by machine and not by the authors. This process is experimental and the keywords may be updated as the learning algorithm improves.
This is a preview of subscription content, log in to check access.