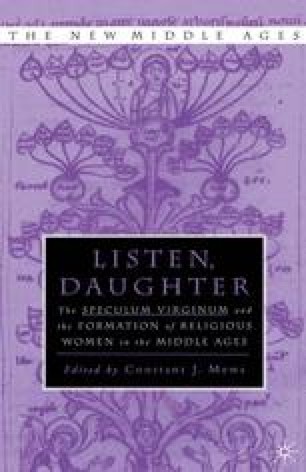 The Speculum Virginum: The Testimony of the Manuscripts

This chapter introduces the manuscripts of the Speculum virginum, with particular attention to considering the significance of the British Library manuscript, Arundel 44 (L), and what the manuscripts might reveal about the identity of its author. It places this fictional dialogue between a religious guide and a female disciple within the context of reforming currents in the twelfth century that attached great importance to the involvement of women in religious life. While the Arundel manuscript was given to the Cistercian abbey of Eberbach by the late twelfth century, the Cologne manuscript of the Speculum virginum, copied either directly from L or (as is suggested here) from its exemplar, probably came from the Augustinian abbey at Andernach, founded in 1128 by Richard of Springiersbach and his sister Tenxwind, with the support of a priest called Conrad. Another early manuscript of the Speculum is associated with a sister house of Andernach, at Frankenthal.

Fifteenth Century Twelfth Century Introductory Letter Library Catalogue Religious Woman
These keywords were added by machine and not by the authors. This process is experimental and the keywords may be updated as the learning algorithm improves.
This is a preview of subscription content, log in to check access.