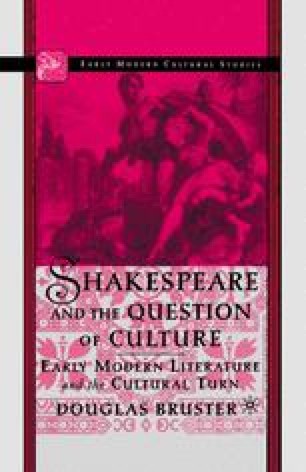 Shakespeare and the Question of Culture pp 95-118 | Cite as

The Dramatic Life of Objects in the Early Modern Theater

The early modern playhouse in England was a theater of easily held things. Hand-held objects figured centrally in plays of all genres there, not just the dramatic adventures of “amorous knight[s]” that Stephen Gosson derides. Indeed, one of the clearest departures that early modern playwrights made from Aristotle’s precepts came in the ready employment of those “lifeless things” that the Poetics goes on to criticize when used as a means of recognition.1 So common was this practice, in fact, that our memories of many early modern plays involve images of characters holding things. With Shakespeare, for example, Haimlet (1601) can suggest a man contemplating a skull; Antony and Cleopatra (1607), a woman with an asp; Romeo and Juliet (1596), a young woman with a dagger. Sometimes this link between character and prop is so strong that certain objects can gesture toward a drama, character, and scene: a severed finger may call to mind De Flores in the third act of The Changeling (1622); a skewered heart, Giovanni in the final scene of ‘Tis Pity She’s a Whore (1632). The endurance of such images—often aided by contemporary and subsequent printed illustrations—helps us to understand why Gosson would claim that, from a spectator’s point of view, the “soul” of many plays resided in their objects.

Theatrical Object Reading Effect History Play Hand Prop Early Play
These keywords were added by machine and not by the authors. This process is experimental and the keywords may be updated as the learning algorithm improves.

… for indeed, [recognition] may take place in this manner through lifeless things or chance events, and one may recognize whether someone has or has not done something.

Sometime you shall see nothing but the adventures of an amorous knight, passing from country to country for the love of his lady, encountering many a terrible monster made of brown paper, and at his return, is so wonderfully changed, that he cannot be known but by some posie in his tablet, or by a broken ring, or a handkircher or a piece of a cockle shell, what learn you by that? When the soul of your plays is either mere trifles, or Italian bawdry, or cussing of gentlewomen, what are we taught?