The Logics of Biopower and the War on Terror 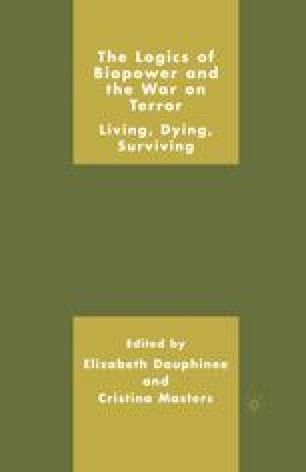 Persistence of Memory? The (New) Surrealism of American Security Policy

An interesting technology of remembrance has localized around the events of 9/11, a series of representations that is essential to understanding contemporary American security policy. The power/relations of remembrance have participated in the constitution of a series of interwoven parables that have formed particular matrices of meaning, all of which paint pictures of (geo)politics, the American Self, the American Other, and the legitimate range of policy possibility in the post-9/11 world. As such, Jenny Edkins has argued, the aesthetic contours of the dominant forms of memorialization in the United States in response to 9/11 have, in combination with the social practices of securitization and criminalization, reinserted linear narratives and previously constructed scripts of global politics, American hegemony, and the legitimate exercise of political voice.2 Thus, the coping strategy brought about by the routinized remembrance of the trauma of 9/11 has been one that has instantiated a form of collective anterograde amnesia (i.e., the inability to form alternate memories) that draws meaning from one (and only one) contextual environment of interpretation. The routinization of remembrance has taken many forms from official memorial services on the anniversary of 9/11 to collections of poetry, songs, and reflections cataloged on various Internet websites. Even the homeland defense system institutionalized by the American federal government is a type of memorial with increases in the level of alertness drawing upon the fears that the American public experienced in the aftermath of 9/11.

It is my hope that in the months and years ahead, life will return almost to normal. We’ll go back to our lives and routines, and that is good. Even grief recedes with time and grace. But our resolve must not pass. Each of us will remember what happened that day, and to whom it happened. We’ll remember the moment the news came—where we were and what we were doing. Some will remember an image of afire, or a story of rescue. Some will carry memories of a face and a voice gone forever. I will not forget this wound to our country or those who inflicted it. I will not yield; I will not rest; I will not relent in waging this struggle for freedom and security for the American people.