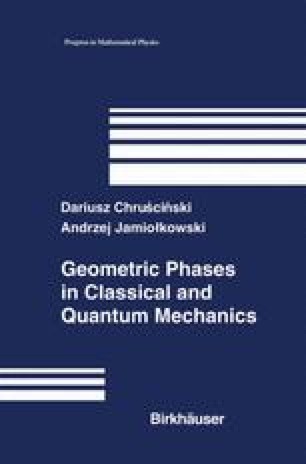 Both Berry’s phase and Hannay’s angles could have been discovered long before they were. In 1938 Russian physicist Sergei M. Rytov investigated the rotation of the polarization vector of light travelling along the coiled ray. Actually, as was shown by V.V. Vladimirskii in 1941, Rytov’s observation finds an elegant interpretation in terms of geometric properties of a coiled ray. It turns out that rotation of polarization may be interpreted as a simple manifestation of the geometric phase. Actually, the similar conclusion was made by Bortolotti in 1926, however, both Bortolotti and Rytov-Vladimirskii papers were completely unknown to optical community.

Gauge Theory Geometric Phasis Exchange Rotation Holonomy Group Quantum Hall Effect
These keywords were added by machine and not by the authors. This process is experimental and the keywords may be updated as the learning algorithm improves.
This is a preview of subscription content, log in to check access.