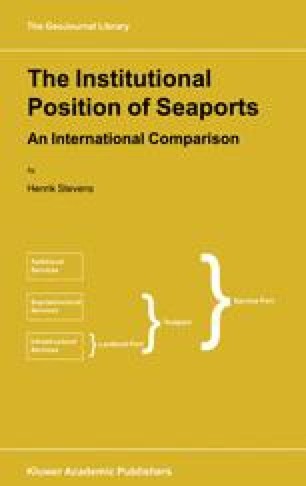 The Institutional Position of Seaports pp 57-125 | Cite as

The Port of Rotterdam

The industrial port complex that has been designated the port of Rotterdam stretches for 40 kilometres from the city of Rotterdam at the south-west point of the Netherlands to the North Sea. The total port area covers 10,500 ha, 3,500 of which are water and 4,081 ha. of which were being let out to rent or lease in 1996. 46 kilometres of wharf was being leased in 1996. 15,000 km of pipeline for the (petro)chemical industry runs through the port area. There are 1.1 million residents in the Rotterdam region. In 1996, there were 63,000 jobs directly linked with the port. This resulted indirectly in 276,000 jobs in other parts of the country. In 1998 the port handled about 30,000 ocean-going vessels and approx. 135,000 inland vessels which together transhipped 315 million tons of freight. With the total number of containers handled in 1997 amounting to 5.45 million TEU, Rotterdam retained its position as the largest container port in Western Europe (Centre for Research and Statistics, 1995; RMPM, 1997).

Central Government City Council Port Area Business Community Container Terminal
These keywords were added by machine and not by the authors. This process is experimental and the keywords may be updated as the learning algorithm improves.
This is a preview of subscription content, log in to check access.