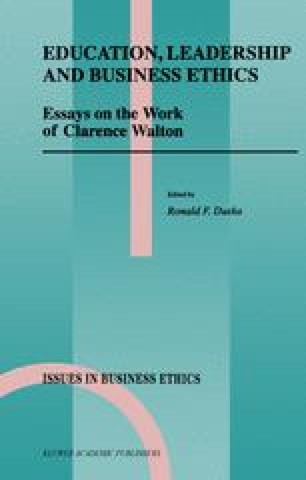 My name is Peg Healy and I am a longtime admirer of Clarence Walton. From one educator to another I salute him. Few people have done more for higher education or cared more deeply about it than he. Anyone who has remained actively engaged in higher education for as many years as he has deserves thanks and praise. It seems to me very appropriate that in this symposium in Clarence’s honor there be a session on Walton’s appraisal of American culture. No one who is serious about educating students can ignore the culture of those being educated. Clarence has watched, as I have, the development in the last several decades of certain scholarly or academic movements which taken together constitute the intellectual climate in which our students and faculty learn and teach. They are movements such as political correctness, postmodernism, deconstructionism and critical legal studies. These movements permeate the disciplines of the academy and are the predominant influences in many of the professional meetings of the faculties of colleges and universities. One tenet of all of these movements is the impotency in varying degrees of the human intellect to discover truth. I mean a truth which can serve as a common standard and by which thought can be judged as right or wrong. In today’s culture as in so many of the past, beginning with Socrates, the chic intellectual position is that of relativism and its consequent skepticism about the possibility of truth. And just as Socrates thought he had to answer the question of the possibility of truth against the sophists before he could begin to educate the Athenian youth, so Clarence Walton takes up the task of critiquing what he perceives to be the intellectual and moral bankruptcy of our own age. Today’s session will continue Clarence’s discussion of these issues.

Business Ethic American Culture Introductory Remark Political Correctness Book Club
These keywords were added by machine and not by the authors. This process is experimental and the keywords may be updated as the learning algorithm improves.
This is a preview of subscription content, log in to check access.