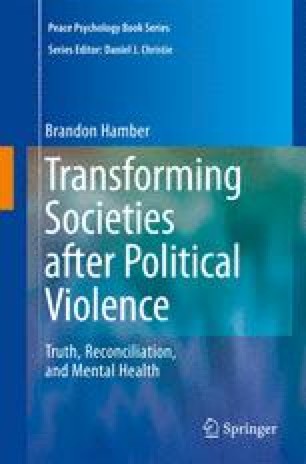 I mentioned in Chap. 4 a conversation I had with one of the TRC Commissioners who commented to me that offering psychological support to victims was not in the written mandate of the Commission, so there was no onus on the TRC to offer such support. I do not think this was a sentiment shared by many other Commissioners, but the anecdote reflects a reality, which is that mental health is still marginalised as a discipline. However, I do not lay the blame for this solely at the door of others. I contend, perhaps controversially in mental health circles, that this is also because understandings of mental health are often acontextual and do not take politics adequately into account.

For example, looking at the professional makeup of the TRC Committees, it is obvious that the Human Rights Violations Committee was dominated by lawyers, the Amnesty Committee by judges and the Reparations and Rehabilitation Committee (hereafter the R&R Committee) by psychologists, doctors and social workers. I maintain, possibly contentiously, that some individuals were ‘placed’ in the R&R Committee for three reasons. First, the R&R Committee was seen as the least important of the three Committees by the TRC leadership; second, the Human Rights Violations Committee was seen as the political and legal engine of the Commission and mental health workers were perceived as being the least politically experienced; and, third, the mental health contribution to the TRC was understood within fairly narrow parameters. It was felt that the TRC as a whole would contribute to the wellbeing of victims by giving them an opportunity to tell their stories. The role of mental health workers was to advise on the testimony process and its potential mental health impacts but was primarily to assess the damage of trauma on victims. Mental health workers, however, were perceived as not sufficiently skilled to deal with the social and political fallout of public testimony and the TRC process as a whole.

Mental Health Mental Health Professional Political Violence Transitional Justice Civic Participation
These keywords were added by machine and not by the authors. This process is experimental and the keywords may be updated as the learning algorithm improves.
This is a preview of subscription content, log in to check access.