Make Time for the Stars 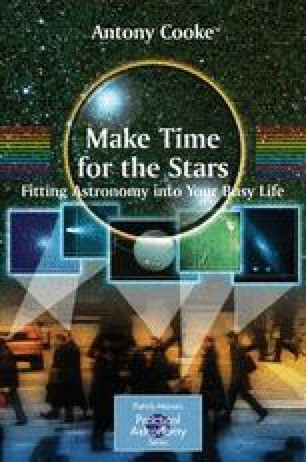 The Far In and Far Out

With the three grandest planets in the solar system always likely to remain a major focal point of the amateur's visible universe, there are nevertheless some other worthy sights in the local neighborhood. It has to be said, however, at least in the visual sense, that most observers will always regard these other destinations as the solar system's “poor relations.” As potential spectacles for live viewing, except for the occasional appearance of a great comet, we must reluctantly concede that indeed they are the poor relations! Nevertheless, there is still much to enjoy and explore as long as we approach them with just a little different attitude. However, especially with time not on our side, it would be useless to pretend that, at the telescope, these subjects are comparable in any way to those of the last chapter, or that equivalent success may be achieved with them. Rather, we need to approach these elusive objects with a special appreciation of what we are actually seeing.

We need to take advantage of the insights gained from closeup rendezvous of space missions, or images obtained with giant earthbound telescopes fitted with adaptive optics and other enhancing equipment. Thus, seeing them again through the telescope will be a different experience. What we are witnessing for ourselves will never be more meaningful, and less likely to seem uninteresting, when compared with the more accessible and more visually dramatic places of the solar system. Visit the NASA web sites listed in Chap. 16; in the regions of the solar system described within this chapter, these sites play a larger role than ever.

Solar System Cloud Layer Adaptive Optic Kuiper Belt Minor Planet
These keywords were added by machine and not by the authors. This process is experimental and the keywords may be updated as the learning algorithm improves.
This is a preview of subscription content, log in to check access.

Cite this chapter as:
Cooke A. (2009) The Far In and Far Out. In: Make Time for the Stars. Patrick Moore's Practical Astronomy Series. Springer, New York, NY