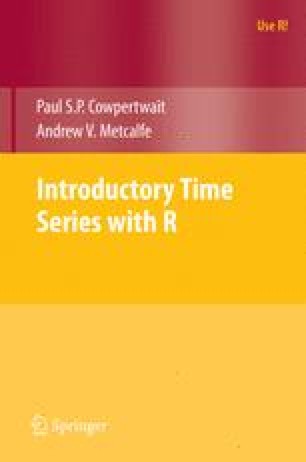 Chapter
Part of the Use R book series (USE R)

Data are often collected on more than one variable. For example, in economics, daily exchange rates are available for a large range of currencies, or, in hydrological studies, both rainfall and river flow measurements may be taken at a site of interest. In Chapter 10, we considered a frequency domain approach where variables are classified as inputs or outputs to some system. In this chapter, we consider time domain models that are suitable when measurements have been made on more than one time series variable. We extend the basic autoregressive model to the vector autoregressive model, which has more than one dependent time series variable, and look at methods in R for fitting such models.

Unit Root ARIMA Model Residual Series Stochastic Trend Time Series Variable
These keywords were added by machine and not by the authors. This process is experimental and the keywords may be updated as the learning algorithm improves.
This is a preview of subscription content, log in to check access.