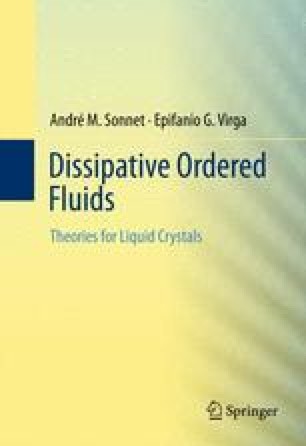 At this stage of our development we apply our general theory to a field that is still somewhat controversial. Though the orienting effect of an ultrasonic wave on the nematic texture has long been known,1 its interpretation in terms of a coherent dynamical theory, widely if not universally accepted, has not yet been achieved. In this chapter, following [354] and [67], we phrase such a theory within the setting of this book; hopefully, this will serve as a further illustration of the generality of our method. Below, we first summarize the diverse theoretical approaches attempted in the past to describe the interaction between sound and molecular orientation in nematic liquid crystals. We then revive a theory for second-grade fluids, which we believe provides the most appropriate theoretical background to posit our nematoacoustic theory that elaborates on a proposal not new in its intuitive phrasing, but which has only recently found both a more precise theoretical formulation and its first experimental validation.We shall actually depart from the latest theoretical formulation in an effort to draw from it all its consequences. A closing explicit application to a simple computable case will also show some predictions of our theory, which are both qualitatively and quantitatively confirmed by a number of experimental results.

Acoustic Wave Nematic Liquid Crystal Linear Momentum Acoustic Streaming Acoustic Intensity
These keywords were added by machine and not by the authors. This process is experimental and the keywords may be updated as the learning algorithm improves.
This is a preview of subscription content, log in to check access.