The Motivational Impact of Nicotine and its Role in Tobacco Use 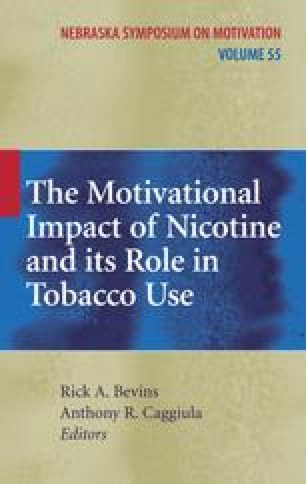 The Functional Significance of Craving in Nicotine Dependence

In 1954, craving was given a death sentence. A panel of experts convened by the World Health Organization advised that the term craving be abandoned because “a term such as ‘craving' with its everyday connotations should not be used in the scientific literature … if confusion is to be avoided” (Who Expert Committees on Mental Health and on Alcohol, 1955, p. 63). In the ensuing half century, craving has persisted in bedeviling scientists, but the term, and the variety of concepts it represents, simply refuses to die.

Unquestionably, craving remains an everyday word – a Google TM search of the terms craving or crave appearing in web pages updated over the past year (April 2006--March 2007) yielded approximately 10,000,000 hits. Craving has been addressed by scientists with escalating frequency. A search of the terms craving or crave in abstracts indexed by Medline or PsycINFO since 1960 (Fig. 10.1) shows that craving research was fairly limited in the 1960 s and 1970 s,...

Nicotine Dependence Drug Seek Cigarette Craving Abstinent Smoker Taxometric Analysis
These keywords were added by machine and not by the authors. This process is experimental and the keywords may be updated as the learning algorithm improves.
This is a preview of subscription content, log in to check access.