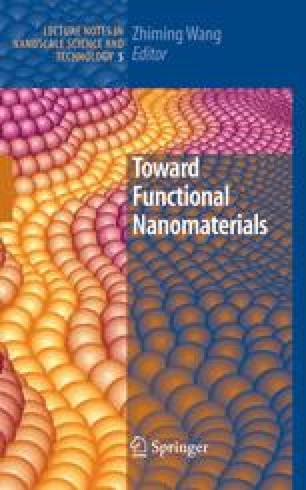 Toward Functional Nanomaterials pp 127-171 | Cite as

Understanding the effects of downscaling the devices’ dimensions to the nanometer size is one of the most important topics in the modern material science applied to microelectronics. In fact, the confinement of electrons in dimensions typical of atoms and molecules obliges to consider their quantum behavior. Therefore, a new class of effects is characterization of ultra-scaled devices. In the last years, these ideas led to the birth of the “nanotechnology and nanoelectronic revolution” with the aim to understand the effects of downscaling the matter in the atomic range and to develop innovative nanostructured materials and quantum effects–based devices following a bottom-up procedure with respect to the traditional top-down scaling scheme.

In the first part of this chapter, we illustrate some methods to fabricate nanostructured materials using metallic nanoclusters in connection with insulator and semiconductor substrates and matrices. The methodologies to control and manipulate the clusters structural properties based on the self-organization mechanism of the Au nanoclusters on the SiC and SiO2 surfaces induced by thermal and ion beam processes are also discussed. In particular, the thermal-induced self-organization kinetic mechanism of Au nanoclusters on SiC hexagonal and SiO2 surfaces is shown to be a ripening process of three-dimensional structures controlled by surface diffusion, and the application of the ripening theory enabled us to derive the surface diffusion coefficient and all other parameters necessary to describe the entire process. Then a detailed study of the morphological modifications occurring during the irradiation, by an Ar beam, of Au nanoclusters on SiO2 surface is presented showing how it is a suitable methodology to tailor the clusters size and surface density. These characterizations allow us to clarify the evolution of the Au clusters during ion bombardment: at low beam current, the cluster mean size increases with ions fluence, and at high beam current, the clusters mean size decreases with ions fluence. This behavior has been described in terms of a conventional ripening process (in which small clusters shrink promoting the growth of the large clusters) at low beam current and of an inverse ripening process (in which the large clusters shrink) at high beam current. The kinetics of clusters self-organization has been modeled using the theory of cluster ripening and inverse ripening under ion beam irradiation that we integrated, for our experimental case, introducing the effect of the sputtering process of Au atoms from the surface by the ion beam irradiation.

Therefore, we suggest to apply the self-organization of Au nanoparticles as a nanotechnology step to control the metal–semiconductor (MS) and the metal–insulator interface at atomic level to fabricate innovative nanostructured devices: the fabricated 6H-SiC/Au cluster-based nanostructured materials were used to probe, by local conductive atomic force microscopy (C-AFM), the electrical properties of nano-Schottky-contact Au nanocluster/SiC. The main observation was the Schottky barrier height dependence of the nano-Schottky contact on the cluster size. Such a behavior was interpreted considering the physics of few electron quantum dots merged with the concepts of ballistic transport and thermoionic emission finding a satisfying agreement between the theoretical prediction and the experimental data. The local nanoscale electrical properties of the SiO2/Au cluster-based nanostructured material revealed a rectifying behavior characterized by a threshold voltage tunable by the clusters size. This behavior is interpreted by comparing physical considerations on metal-oxide-semiconductor structure and on double barrier tunnel junction (DBTJ) device.

Finally, the longitudinal electronic collective transport properties in a disordered array of TiSi2 nanocrystals (with surface density of 1012 cm–2) embedded in Si polycrystalline matrix as a function of temperature are described. The system is characterized by a high degree of disorder compared to the standard disordered nanocrystals array usually studied in the literature. Despite this fundamental difference, we demonstrate that the theoretical models used to describe the collective electronic transport in standard systems are adequate to describe the electrical behavior of such a “non-standard” system.

Threshold Voltage Schottky Barrier Height Schottky Contact Cluster Radius Cluster Size Distribution
These keywords were added by machine and not by the authors. This process is experimental and the keywords may be updated as the learning algorithm improves.
This is a preview of subscription content, log in to check access.