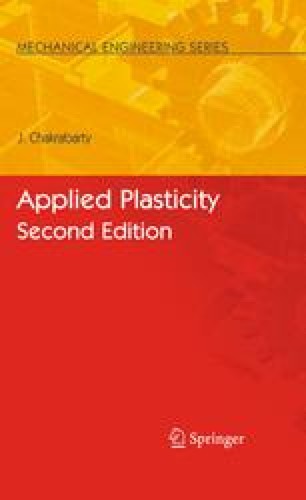 A shell is a thin-walled structure in which the material fills the space between two parallel or nearly parallel surfaces, the mean surface that halves the shell thickness being known as the middle surface of the shell. When the shell is loaded to the point of plastic collapse, the deformation proceeds in an unrestricted manner under constant load, provided geometry changes are disregarded and the material is considered as ideally plastic. As in the case of thin plates, the incipient deformation mode of the shell will be described in terms of that of the middle surface, and the associated stress field will be specified in terms of the stress resultants, acting across the shell thickness. The usual assumptions of rigid/plastic material will be made for the estimation of the collapse load.

Cylindrical Shell Yield Condition Yield Surface Flow Rule Face Sheet
These keywords were added by machine and not by the authors. This process is experimental and the keywords may be updated as the learning algorithm improves.
This is a preview of subscription content, log in to check access.