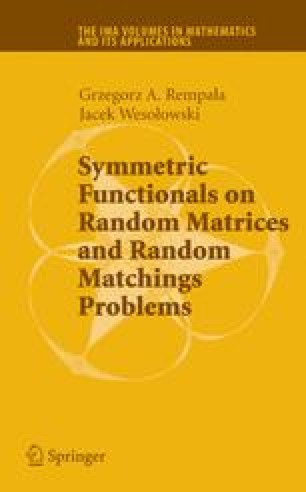 Chapter
Part of the The IMA Volumes in Mathematics and its Applications book series (IMA, volume 147)

As already pointed out, the major difficulty of working with permanents and, in general, with P-statistics, lies in the fact that they are very difficult to compute when the dimensions of the matrix are large. In such case a natural question arises whether one could approximate the complicated exact distribution of a P-statistic by means of a simpler one. The issue leads to the problem of limiting behavior of P-statistics and particularly to the problem of weak convergence. In order to prepare the discussion of the problem for general P-statistics later on (Chapter 5), we shall first investigate in the next two chapters a somewhat simpler (but very insightful) case of a random permanent function.

Limit Theorem Central Limit Theorem Triangular Array Standard Normal Random Variable Real Random Variable
These keywords were added by machine and not by the authors. This process is experimental and the keywords may be updated as the learning algorithm improves.
This is a preview of subscription content, log in to check access.