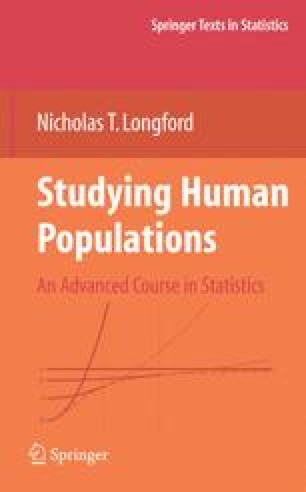 Clustering is a common structure in populations. We belong to families, communities, educational institutions, places of employment, or, in general, clusters. Members of a cluster are often more similar to one another than members of the population in general. When the population comprises many clusters and studying each of them in isolation is not practical, it is meaningful to regard them as another population and study them as such. At the same time, each cluster on its own is a population, with its features that may be described by a model. Therefore, a clustered population may be described by a population of models, which can itself be regarded as a single model. The subject of this chapter are such models. We focus on populations of ordinary regression models, building on the familiar, and expand the horizons later in the chapter.

Variance Matrix Variation Part Ordinary Regression Multivariate Normal Distribution Score Vector
These keywords were added by machine and not by the authors. This process is experimental and the keywords may be updated as the learning algorithm improves.
This is a preview of subscription content, log in to check access.