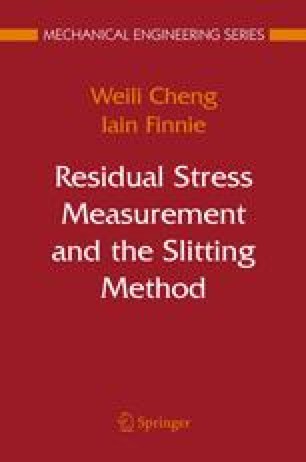 Before we introduce the methods for estimating residual stresses from measured strains, it is helpful to examine strain responses to some typical residual stresses released by a cut of progressively increasing depth. Two stress distributions are considered, one with the peak stress at one surface (Fig. 6.1.a), another, though unsymmetrical, with the same peak stress on both surfaces (Fig. 6.2.a). Different strain responses are obtained depending upon whether the strain gage is located on the right or left face, as shown in Figs. 6.1.b and 6.1.c, or Figs. 6.2.b and 6.2.c respectively. In general, when a tensile stress is released near the surface, the measured strain is initially negative, and vice versa. This response is expected from the superposition principle demonstrated in Section 2.1 that the measured deformation is the same as that produced by applying the released stress to the faces of the cut with an opposite sign. Alternatively, a more intuitive explanation is that the release of a tensile stress opens the cut and leads to a compressive bending stress on the face opposite the cut. As the depth of cut increases, the measured strain variations will take very different forms. Note the more than tenfold difference in the magnitude of measured peak strains shown in Figs. 6.1.b and 6.1.c. In the first case the high stress near the surface is quickly balanced by a compressive stress below the surface, leading to a very gradual strain variation.

Residual Stress Residual Stress Distribution Wire Electric Discharge Machine Compliance Function Compliance Matrix
These keywords were added by machine and not by the authors. This process is experimental and the keywords may be updated as the learning algorithm improves.
This is a preview of subscription content, log in to check access.