Informatics for the Clinical Laboratory 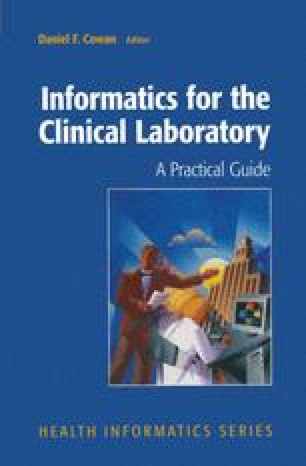 Informatics for the Clinical Laboratory pp 230-250 | Cite as

Computer scientists and engineers, perhaps to make their activities more intelligible and more appealing to lay people, tend to use biological metaphors for the products of their activities. Prominent among these are artificial intelligence, neural networks, and genetic algorithms. All these are more or less expressions for categories of programs and the way they work. The intent (at least of some practitioners) is recreate the intelligence of a human in a machine. Whether this is possible or even desirable depends on how one looks at the processes of a machine and the processes of the human mind. History, folklore, and literature are full of accounts of attempts to create man or the intelligence of man in a robot or automaton: the Golem in Jewish folklore, the creature in Mary Shelley’s Frankenstein, and HAL, the computer in Arthur Clarke’s 2001: A Space Odyssey. It is interesting to reflect on how many of these efforts failed or went out of control because of the lack of a human moral sense in the creation. One of the very best and most scholarly and thoughtful works on the subject of “computer intelligence” is Jaki’s Brain, Mind and Computers.1

Genetic Algorithm Expert System Data Warehouse Inference Engine Heuristic Rule
These keywords were added by machine and not by the authors. This process is experimental and the keywords may be updated as the learning algorithm improves.
This is a preview of subscription content, log in to check access.