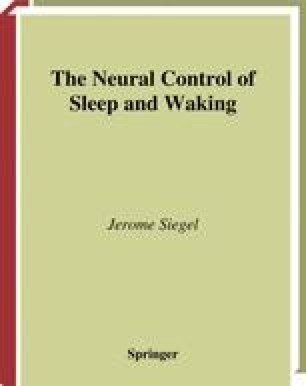 The Discovery of the Ascending Reticular Activating System

Shortly after war ended in 1945, publications appeared utilizing the available technologies that had been on hold since the 1930s. The first notable postwar research in sleep and waking came from a collaboration between an Italian and an American. In 1948 Giuseppe Moruzzi (1910–1986) at the University of Pisa in Italy, went to Northwestern University in Evanston, Illinois, to work for a year with Horace Magoun (1907–1991). The result of this collaboration was published in 1949 in the inaugural volume of the scientific journal, Electroencephalography and Clinical Neurophysiology (commonly known as “the EEG Journal”) (Moruzzi and Magoun, 1949). In the study, entitled Brain Stem Reticular Formation and Activation of the EEG, cats were surgically prepared using a general anesthetic, α-chloralose, or the encéphale isolé preparation of Bremer. Both experimental procedures achieved the same effect, namely, a cat that displayed high voltage, low frequency (HVLF) EEG waves (the major sign of slow-wave sleep) that could be desynchronized into a low voltage, high frequency (LVHF) rhythm (the EEG sign of arousal). With the cat’s head positioned in a stereotaxic instrument, subcortical brain areas could be accurately probed with electrodes for electrical stimulation.*

Reticular Formation Superior Cerebellar Peduncle Oscilloscope Trace Encephalitis Lethargica Mesencephalic Reticular Formation
These keywords were added by machine and not by the authors. This process is experimental and the keywords may be updated as the learning algorithm improves.

These preparations are referred to as “acute preparations” in the sense that all the data are collected in one session. At the end of the experimental session, the animal is sacrificed and the brain removed for histological analysis to determine the exact location of the electrode.