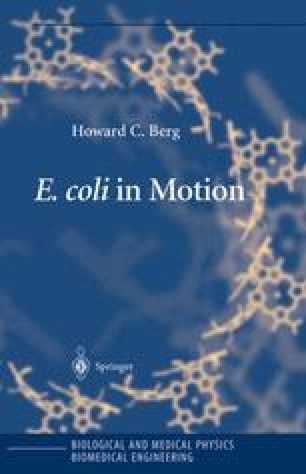 If one looks through a microscope at a suspension of cells of motile E. coli, one is dazzled by the activity. Nearly every organism moves at speeds of order 10 body lengths per second. A cell swims steadily in one direction for a second or so (in a direction roughly parallel to its body axis), moves erratically for a small fraction of a second, and then swims steadily again in a different direction. Some cells wobble from side to side or tumble end over end. A few just seem to fidget. Given enough oxygen, the cells do this forever, even as they grow and divide. Near the middle of such a preparation, cells rapidly appear and disappear as they move in and out of focus, while at the bottom or the top they tend to spiral along the glass surface, clockwise (CW) at the bottom, counterclockwise (CCW) at the top. The speed at which the cells swim depends on how they have been grown (two to three times faster when grown on a rich medium than on a simple one), on the ambient temperature (twice as fast at body temperature than at room temperature), and on how they have been handled. Flagella are fragile and break if suspensions are subjected to viscous shear, particularly when cell densities are high (as in a centrifuge pellet). If one tries to resuspend such a pellet by flicking the centrifuge tube with one’s finger, cell motility is noticeably degraded.

Spatial Gradient Small Chamber Viscous Shear Temporal Stimulus Geiger Counter
These keywords were added by machine and not by the authors. This process is experimental and the keywords may be updated as the learning algorithm improves.
This is a preview of subscription content, log in to check access.