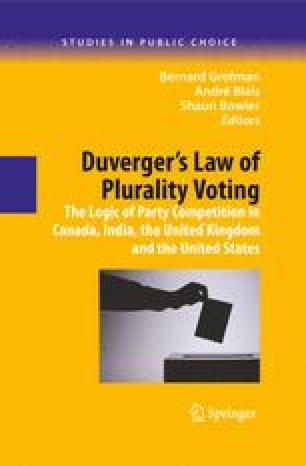 Textbooks on British politics differ in how they characterize the party system. Some emphasize that the UK has traditionally had a two-party system, but that the last few decades have seen movement toward multipartism in the electoral arena, and, to a lesser extent, in Parliament (e.g., Jones and Kavanagh 1998, 45–55; Norton 1994, 110; Freedman 1996).1Others place more emphasis on the proliferation of parties, highlighting multiparty politics as an essential aspect of modern Britain (e.g., Peele 1995, 182–183). Amongst electoral-system specialists, this same difference in shadings can be found insofar as some scholars characterize Britain as a slight or minor exception to the Duvergerian prediction of plurality electoral-systems having two-party politics (e.g., Taagepera and Grofman 1985; Sartori 1997, 38–39), while others seem to take more seriously the puzzle of extra British parties (e.g., Duverger in Grofman and Lijphart 1986, 76–80). Summarizing the results of the 2005 general...

Vote Share Party System Strategic Vote Electoral Rule Seat Share
These keywords were added by machine and not by the authors. This process is experimental and the keywords may be updated as the learning algorithm improves.
This is a preview of subscription content, log in to check access.

Thanks to Delinda Swanson for assistance with assembling data and to conference participants (other chapters' authors) for helpful comments.