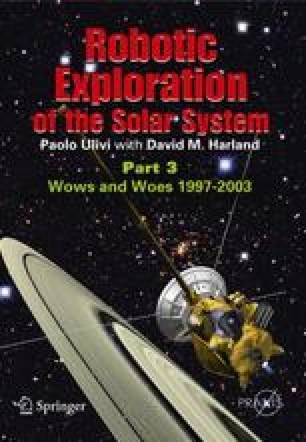 Robotic Exploration of the Solar System pp 195-286 | Cite as

The year 1996 had been a landmark year for planetary exploration and in particular for the United States of America. As the development of the Cassini spacecraft was nearing completion, NASA launched the first three missions which had been built in accordance with its new ‘faster, cheaper, better’ strategy. This concept, intended to provide frequent, more focused and less expensive deep-space missions had given rise to two different programs.

Solar Wind Solar Panel Deep Space Halo Orbit Attitude Control System
These keywords were added by machine and not by the authors. This process is experimental and the keywords may be updated as the learning algorithm improves.
This is a preview of subscription content, log in to check access.